Samoa took over the Presidency of the African Caribbean & Pacific (ACP) Group of States from 1 August 2013 to 31 January 2014.

The Ambassador Extraordinary and Plenipotentiary of Samoa to the Kingdom of Belgium, His Excellency Fatumanava III Dr. Paolelei Luteru is the new Chairman of the ACP Committee of Ambassadors in Brussels. 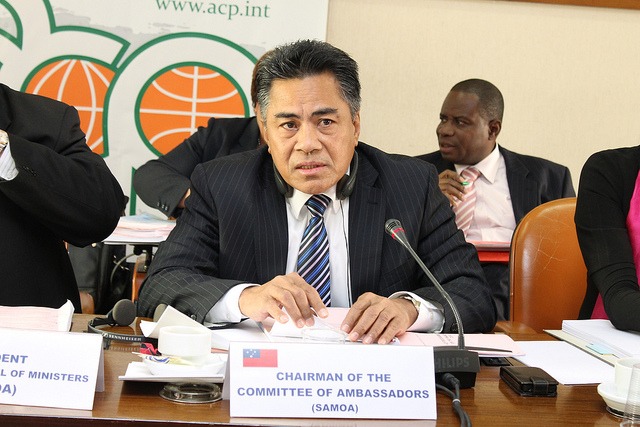 At the first meeting of the Committee on 12 September 2013 Fatumanava stressed that Samoa’s presidency will be defined by actions and not words.  He said that the ACP Group shall continue to focus on the ‘bread and butter issues’ of its cooperation with the EU which included the Economic Partnership Agreement (EPA) negotiations, the private sector development strategy for the ACP Group, and the programming of the 11th EDF at the national and regional levels including bridging funds.

Fatumanava further highlighted the importance of the future of the ACP Group both in the recommendations to be submitted to the 8th Summit of ACP Heads of State and Government and the finalisation of the ACP position on the post 2015 Development Framework.

For the ACP Group to grow and enhance its future relations with its strategic partners, Fatumanava argued that the Group needs to forge a new strategy imbedded in dialogue at the political level.  He noted that the focus of current engagement has primarily been ‘money centred’ rather it should concentrate on the political aspect of engagement which would provide a conducive environment for the technical discussions and negotiations to follow. The ACP Group would benefit from this approach especially on key global issues such as energy, climate change, democracy and rule of law, good governance, investment and the Post-2015 Development Framework. The ACP Group must be positioned as a value added partner and move beyond the constraints of donor-recipient mentality.

You can access the ACP Secretariat Press Release and watch the video of Ambassador Luteru’s interview with Ms Josephine Latu-Sanft, Press Attaché at the ACP Secretariat onhttp://www.acp.int/content/featured-video-samoan-presidency-targets-action-rather-talk-acp-envoys

*Photograph: Courtesy of the ACP Secretariat