The Honourable Prime Minister met with Bernard Lapasset in Brussels on Wednesday 10 December to discuss a number of issues including those raised recently by some Manu Samoa players. The World Rugby meeting is part of a programme of official engagements by Tuilaepa which included the 100th Session of the ACP Council of Ministers on which he presided as Chair up to January 2014, information exchange with the newly elected EU High Representative on Foreign Affairs and Security Policy, Ms Federica Mogherini and the Commissioner for Humanitarian Aid and Crisis Management, Mr Christos Stylianides, and a Pacific ACP Council of Ministers meeting.

During the meeting with Mr Lapasset the SRU Chairman caution against external interference in the affairs of the Union. He also highlighted the fact that Samoa, unlike tier 1 nations, is not in a financial position where it can afford to pay its players similar level of allowances to those enjoyed by players in countries such as New Zealand or England. Both points were fully appreciated and understood by World Rugby. 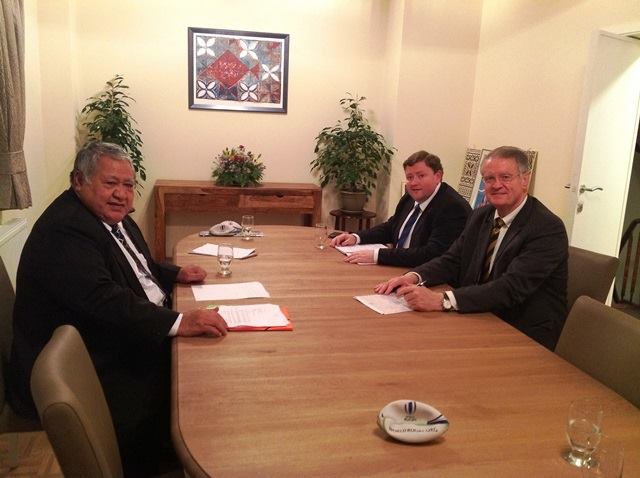 On SRU initiated reforms, World Rugby acknowledged and supported the proactive role of the Samoa Rugby Union with their ongoing programme of reforms deemed appropriate for high performance sports in an era of professionalism. World Rugby also pledged financial support in the implementation phase of these reforms. The PM also informed the Chair of World Rugby that SRU is also proactively seeking out new sponsorships. The contribution by Samoa as a tier 2 nation to world rugby development was also acknowledged by Mr Lapasset.

As part of on-going engagement with World Rugby, Tuilaepa accepted a proposal from Mr Lapasset for World Rugby to visit Apia in late January or early February 2015 for further discussions and to see first-hand progress achieved regarding SRU led reforms. The opportunity will also be taken to explore potential avenues to strengthen rugby in Samoa.

Tuilaepa also took time out to meet with a number of Manu Samoa players during his visit to Brussels.