The ACP Council of Ministers met from 29-30 November in Brussels to consider amongst other issues the organisation’s budget for 2017 and to decide on the Group’s future post-2020.

This was a landmark and defining session given the need for Council to take decisions which would guide the Group’s work programme and focus post-2020 as well as providing guidelines for negotiations with the EU on a successor agreement to Cotonou.

In brief, Council approved in principle the three strategic pillars to guide the Group’s work after 2020 but mandated the Committee of Ambassadors to commence work on the structure, governing organs and institutional arrangements to allow the Group to successfully accomplish its vision, mission and strategic pillars.  In addition, Council also directed the Committee of Ambassadors to develop proposals for ensuring greater intra-ACP cooperation, trade and commercial ventures.  A review of the Georgetown Agreement in order to modernise it and ensure that the new vision is enshrine therein was also directed by Council. 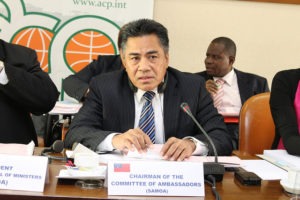 On ACP-EU relations, Council further mandate the Committee of Ambassadors to undertake a thorough assessment of the Cotonou Agreement and to utilise Article 8 for political dialogue with the EU.  Council also instructed the Committee to immediately commence work on preparing a roadmap in readiness for negotiations with the EU including negotiating briefs, core principles to guide negotiations and the establishment of appropriate negotiating groups/clusters.

Finally Council adopted the 2017 Budget for the ACP Secretariat amounting to 16,013,381 € and approved the guidelines to be followed in the event of a natural disaster in an ACP country.

Samoa was represented by its Ambassador to Belgium and the EU.