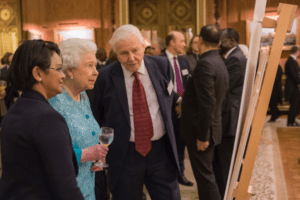 A presentation ceremony and reception hosted by the Queen to recognise the 20 Commonwealth countries already committed to the QCC initiative was held at Buckingham Palace on 15 November 2016.  Samoa was represented by its High Commissioner to the UK and the Court of St James, H.E. Fatumanava III Dr Pa’olelei Luteru.